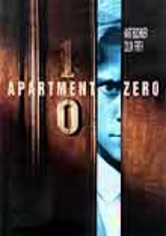 1988 R 2h 4m DVD
Adrian LeDuc (Colin Firth) is a cash-strapped loner eking out a living running a revival cinema in modern-day Buenos Aires. With interest in classic films waning, he's forced to rent out his insane mother's room to a seemingly harmless stranger, Jack Carney (Hart Bochner). They quickly become friends, but as Adrian displays the same problems that plagued his mother, he also begins to suspect his roommate is a killer. Is he right, or is he just plain mad?