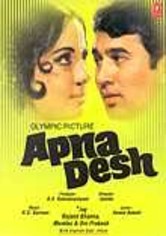 1972 NR 2h 31m DVD
When it's discovered that four prominent members of the community are crooks and black marketeers, young Akash (Rajesh Khanna) -- posing as an expatriate smuggler -- teams with his girlfriend, Chanda (Mumtaz), to expose them. But to nail the quartet -- a tradesman, a doctor and a builder, all led by a wealthy industrialist (Madan Puri) -- Akash must get them to confess their misdeeds while Chanda surreptitiously captures everything on film.