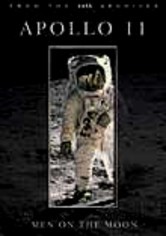 2003 NR 3 discs
America's "one giant leap for mankind" -- the Apollo 11 lunar mission -- is chronicled from launch to landing via comprehensive footage of the landmark event. Features all TV transmissions, all 16mm on-board film, multi-angle views of the launch and the lunar landing. Bonus features for this installment of Fox's Spacecraft Film series include the launch vehicle build, crew suit-up, recovery and extra TV feeds including on-board audio.