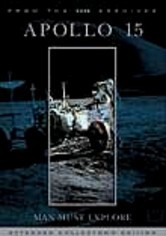 2004 NR 6 discs
In the summer of 1971, NASA attempted yet another ambitious and challenging mission: Land Apollo 15 in the Hadley-Apennine region of the moon. This series follows the small spacecraft's remarkable stint on the moon's surface. The crew explored the beautiful region of Mt. Hadley and the Hadley Rille, and with the help of onboard film, the original television broadcasts and more, you will see NASA's fourth lunar landing in great detail.