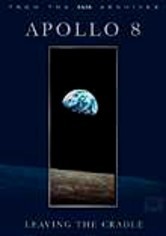 2003 NR 3 discs
America's first manned lunar orbit from launch to splashdown is exhaustively covered via comprehensive footage of the Apollo 8 mission. This installment of Fox's Spacecraft Film series features the TV downlink including the famous Christmas Eve broadcast, all on-board 16mm films, close-up views of the moon from lunar orbit, multi-angle views of the launch and astronaut commentaries.