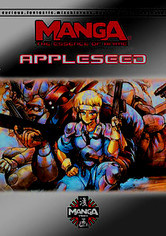 1988 NR 1h 8m DVD
In a futuristic world that's been ravaged by World War III, humans and robots known as bioroids coexist peacefully, transforming the last smoldering city on Earth into the cyberpunk oasis of Olympus. But paradise isn't as idyllic as it seems, which makes it a target for terrorists bent on destroying the city. Kazuyoshi Katayam directs this fast-paced sci-fi anime adventure based on the manga by Masamune Shirow.