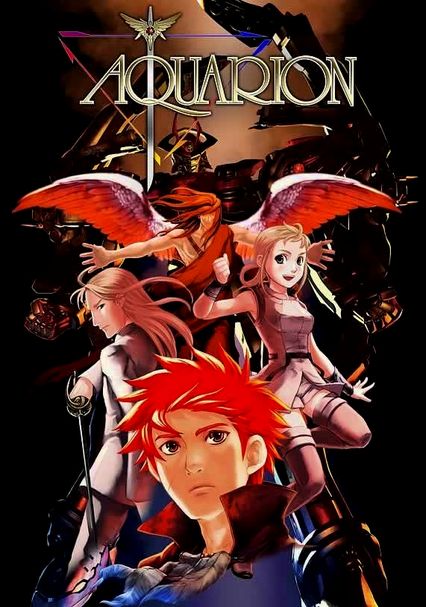 The battle for mankind's future continues in this action-packed anime series from creator Shoji Kawamori. In the final 13 episodes of the show's first season, teenager Apollo and his fellow saviors unite to control the mega-weapon Aquarion. But time is running out for mankind, as the long-dormant Shadow Angels pursue their relentless mission to absorb human souls, destroy Earth's cities and overtake the planet.

Parents need to know that Aquarion is a complex anime series that includes enough violence and sexual allusions to be inappropriate for younger kids. The villains are a team of skeletal flying beings who drain humans' life energy by lulling them into submission and sending them to an extraction center, where they become haunting and ghost-like as the energy transfer takes place. Battle scenes show ships shot down and robots trampling buildings and people, but visible injuries aren't evident. You'll also hear some language in heated moments, including "dammit" and "hell." Although the characters don't engage in sex themselves, there are unmistakable allusions to it in how the three main characters "merge" their life elements (their shadowy nude forms overlay each other as their respective ships join, and they gasp and breathe heavily in delight).

Overt sexual themes exist in the story, from the romantic implications of Apollonious and Touma's history to the near-orgasmic nature of the merging of elements, whose human forms gasp and sigh in pleasure as their ships overlay each other and their shadowy nude bodies meld together. Outlines of breasts are visible, but there's no other detail. Sylvia's obsession with her older brother borders on incestuous.

Fighting scenes are lengthy and intense. Humans punch, kick, and bite to gain the upper hand; ships fire at each other to down enemy craft. Even so, no injuries are visible, though some injured are shown on hospital beds hooked up to machines. People's draining life energy is shown in shadowy forms with blank eyes, and they eventually look more like ghosts as the process nears an end, implying their deaths.

Good and evil battle over Earth and use physical violence to exert dominance. Destiny plays a greater role in a person's success than does hard work or determination. The story includes several elements of mythology and is rooted in the idea of reincarnation. Since Aquarion's full power is only recognized when three elements are in sync, the importance of teamwork is a theme that's revisited often.