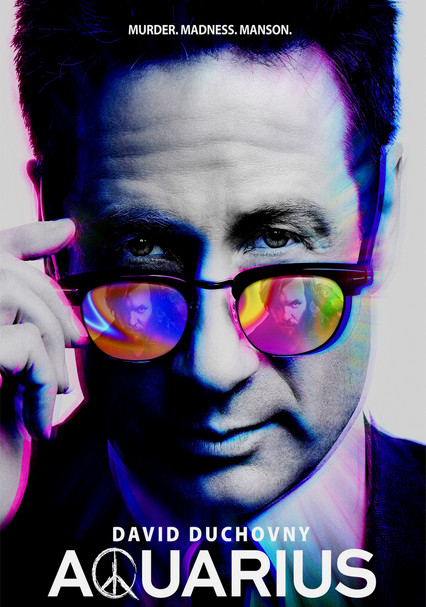 2015 TV-14 1 season
Against the psychedelic backdrop of 1960s Los Angeles, lawman Sam Hodiak teams with an undercover cop to help find a missing teen. Sam's life and career are forever altered when he encounters a hippie cult led by charismatic ex-con Charles Manson.

After an influential attorney's daughter vanishes, Los Angeles lawman Sam Hodiak joins the hunt for the girl. The trail soon leads him to an outlandish hippie cult whose leader, Charles Manson, will eventually come to dominate Sam's life and career.

Parents need to know that Aquarius is a tense, gritty period drama about a cop investigating a runaway who's joined the Manson family. Marijuana is smoked frequently on-screen, and characters drink and smoke cigarettes. There are many sexual references, including oral and group sex (with a fearful underage girl). Women are asked to provide sexual favors as a part of bargains. Cursing includes "hell" and "bitch," plus racial language("spics" and "jigs"). Many characters, including law enforcement, use corrupt means to get information, including roughing up a suspect and planting drugs. The Manson family committed a series of grim murders; viewers can expect to see references to them on-screen.

Manson's female followers often use sex to further the family's aims. Visual references to sex and oral sex; no nudity. Group sex is graphically depicted on-screen with a not-entirely-willing participant. A woman's sexual favors are used as a pawn in a bargain; references to "plowing" and "boning."

The hero of our drama roughs up a suspect to get information. The action of the show is leading up to a series of grisly murders.

The drama's focus on law enforcement is subverted by the glamorization of the Manson family.

Drama is based on real-life events and characters but isn't strictly factual, which can confuse young viewers.