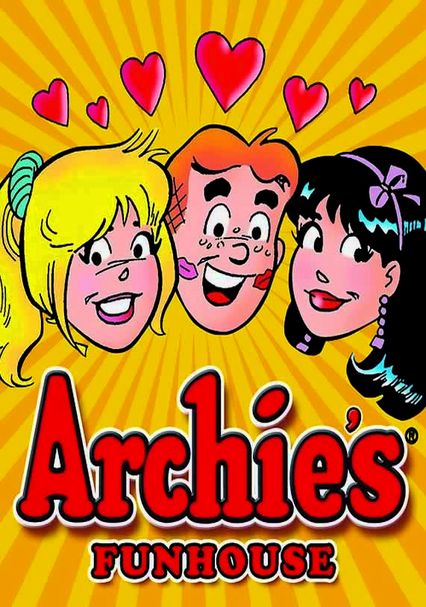 1968 TV-Y7 1 season
Bearing more than a passing resemblance to the "Rowan & Martin's Laugh-In" format so popular at the time, this animated variety show has Archie and his comic book gang performing skits and music, with live-action footage of kids mixed in.

In this 1970 sequel to the original "Archie" series, Archie, Betty, Veronica, Jughead and Reggie are back ... and they're putting on a variety show! "Archie's Funhouse" finds the gang performing skits, music, jokes, magic tricks and more.

Parents need to know that Archie's Funhouse comprises rapid-fire comical skits, slapstick humor, jokes, and musical segments featuring songs by the Archies. The content is clean, and the humor is often corny, but there's a persistent sexism embedded into the otherwise entertaining cartoon. Female characters tend to moon over the guys, and these one-sided crushes are played for laughs, as is the physical appearance of an unattractive girl whose attempts are chronicled in a recurring segment called "How to Catch a Man."

The characters run into things, have objects dropped on them, and suffer a myriad of mishaps in trademark cartoon fashion, but injuries are rare.

Female characters come across as superficial and boy-obsessed, and their physical appearances are a consideration in how attracted the guys are to them. Certain character traits (laziness, vanity, denseness) are played for laughs in skits and jokes.

The show is one of many inspired by the characters of the Archie comic books.