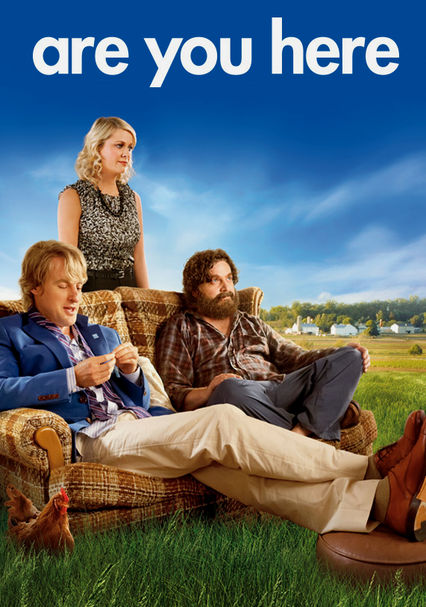 2014 R 1h 52m Blu-ray / DVD
When bipolar man-child Ben learns his estranged father has died, he and his womanizing best friend head to the family farm, which has been bequeathed to Ben. But will his resentful sister block the inheritance and all the opportunity it represents?

Parents need to know that Are You Here centers on the friendship between two not-so-emotionally healthy guys (Owen Wilson and Zach Galifianakis) who've known each other since childhood. One is immature, constantly stoned, and quick to pursue every woman he sees, while the other is mentally ill and reluctant to address his condition with real treatment. Their friendship is challenged when one inherits a substantial amount of money and it's not clear he can handle his newfound wealth. Expect plenty of marijuana use and drinking, as well as frequent swearing (everything from "f--k" and "s--t" to "bitch" and "a--hole"). Some scenes include nude women, and one long sequence includes a naked man seen from behind. There's also some kissing and suggestions of impending sexual activity.

One character is a reckless womanizer who tries to bed almost anyone, including co-workers, strangers, and grieving widows. He's a regular with prostitutes and often peers out the window at a female neighbor when she's changing clothes. A few scenes show nude women, and one long sequence includes a naked man seen from behind. Also some kissing and suggestions of sexual activity about to happen.

Some bickering between friends and family members. A man upsets a dining table in a fit of pique. One scene shows a man slaughtering a live chicken.

True friendship is vital, but, as one character says, it's rare to find it among adults, so it must be nurtured.

Some beer brands are shown on camera, including Bud Light.

The two main characters smoke pot almost constantly, one to self-medicate his mental illness, the other to mask his profound unhappiness. They also drink heavily, everything from beer to whiskey, at home, at bars, at work, wherever.