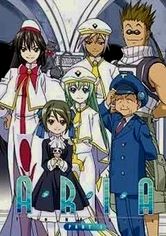 2006 NR 1 season
In the beautiful city of Neo Venezia, friends and gondoliers Akari, Aika and Alice experience many exciting adventures, including taking part in a treasure hunt, enjoying carnival festivities and getting lost in a flooded maze-like warehouse. In this collection of anime episodes, Akari learns there are many parts of her hometown she doesn't know about and that Neo Venezia has a unique history -- different than that of the original Venezia.

Still motivated by their shared goal of becoming the best gondoliers in Neo-Venezia, Akari, Aika and Alice move forward toward achieving Prima status. But the girls are up against more than their own abilities. In this collection of episodes from the series based on Kozue Amano's best-selling manga, the friends take on a perilous passenger, work together to paint a palina and pull hostess duty at the Festa del Redentore.