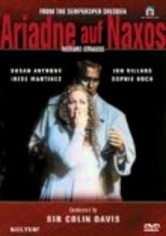 1999 NR 2h 15m DVD
Richard Strauss's opera based on the work of Molière is actually a meta-opera about an ambitious man determined to impress with his newly minted money by throwing a party complete with two opera performances. Worried there won't be enough time to enjoy both operas, he demands they be shown simultaneously. Directed by Marco Arturo Marelli, the film features Susan Anthony as a beleaguered opera star and co-stars Iride Martinex and Sophie Koch.