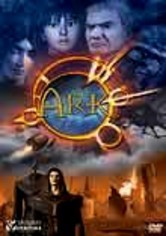 2005 NR 1h 30m DVD
In this anime feature, the planet Alcyone faces obliteration, forcing the remnants of its two civilizations to crowd together in a domed metropolis carried upon the back of an enormous robot called the Ark. Designed by the Ceveans with the help of a mysterious priestess, the Ark is soon captured by the warlike Storrions, giving them squatters' rights. But without the priestess's guidance, the Storrions have no way to pilot or control the robot.