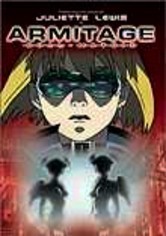 2001 NR 1h 30m DVD
A full-length anime feature that's chock full of fighting action, this sequel to the first Armitage series finds Naomi Armitage, her husband and their daughter living peacefully under false names on Mars until a cyborg rebellion erupts on Earth. Naomi knows that it's up to her to rescue the planet and its inhabitants, but she must deal with the most powerful enemy she's ever encountered -- replicas of herself!