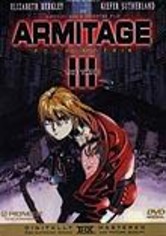 1996 NR 1h 30m DVD
In the year 2179, Earth is populated by humans, robots and illegal humanoid robots. The illegals live undetected among the population, until one powerful man vows to destroy them. Naomi Armitage is a deadly cyber-punk Martian cop in hot pants. But she is an illegal, now fighting for survival. Her partner, Ross, joins her mission, and they are brought together in a bond of hope as their journey uncovers a secret that could destroy two worlds.