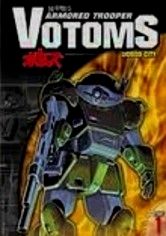 1983 NR 3 seasons
Caught up in an illegal mission to steal military secrets, Armored Trooper Chirico Cuvie is on the run from his own army. Left to die by his traitorous commanders, Chirico heads to a hive of criminals and refugees, where he'll need all of his battlefield-honed skills to survive. Driven by the image of a mysterious woman whose destiny is linked to his own, Chirico begins a quest that will shake the foundations of the entire galaxy.

Separated from his love, Fyana, after the fall of Uoodo City, Armored Trooper pilot Chirico Cuvie travels to a military base in the violent Kummen Jungle and becomes a mercenary pilot. It's here that the real battle ensues in this Japanese animated series. When a mysterious pilot is found working with enemy forces, Cuvie is certain it's his beloved Fyana. Includes the following episodes: "Fyana," "Assemble EX-10" and "Doubts."

With Chirico critically injured after a costly battle with the Balarant, Fyana must make a decision when they realize they are trapped on a spaceship heading deeper into Balarant space in the third installment of this anime series. Her dangerous plan takes an unexpected turn when the Secret Society appears, and the situation becomes even tenser when Chirico learns an amazing secret about his history.

On the mysterious planet Quent, Chirico discovers the amazing secret of his true identity and realizes how he must resolve the long-running conflict between the Balarant and Gilgamesh in the exciting conclusion to this anime series. As he prepares for combat with two combined armies, Chirico fears that the battle will endanger the friends he has vowed to protect when a mysterious force is awakened deep within the planet.