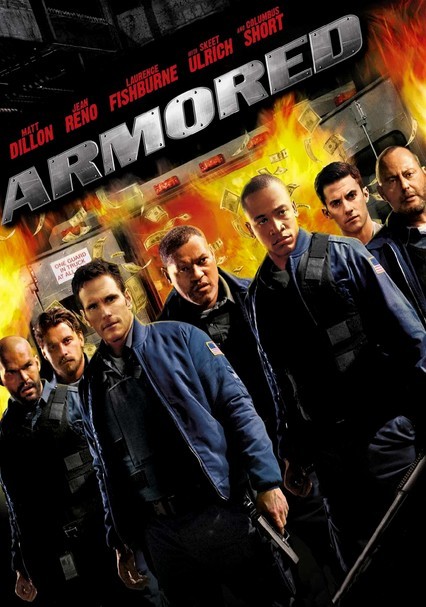 2009 PG-13 1h 28m Blu-ray / DVD
Three armored truck guards turn against one another after their scheme to steal $10 million from their employer goes haywire. When a witness throws a wrench into their "perfect" plan, each man scrambles to save his own skin -- whatever the cost.

Parents need to know that although Armored is a violent crime film with lots of blood and a fair amount of strong language (including "s--t" and "f--k"), it's almost old-fashioned in its clearly defined take on "good guys" and "bad guys" and ultimately sends the message that crime isn't an easy way out. The main character reluctantly participates in the central heist scheme out of desperation, but when the "simple" job turns into a bloodbath, he decides to do the right thing. Sure, there are plenty of logic loopholes, and it's not exactly a life-changing cinematic experience, but older teens and adults might find it entertaining.

A few shots of shirtless men, plus some mildly suggestive jokes.

Very violent, and lots of people get hurt. A homeless man is shot in the back, then again in the head when he tries to get away. A cop is shot in the belly, complete with several quarts of blood. A man is stabbed to death off screen. Another man commits suicide by jumping off a roof, and yet another gets too close to an exploding bomb (viewers see his burning corpse at a medium distance). Finally, a man is killed in a spectacular vehicle crash. Characters brandish guns often, almost to the point of showing off. Perhaps even more painfully, characters often injure their hands while trying to bang the door hinges off of an armored truck.

Although the movie makes it pretty clear that crime isn't the easy way out when a "simple" job with "no victims" quickly turns into a disastrous bloodbath, the strong violence and and generally gritty feel take away from the message.

One mention of Coke.

A character smokes once, in one scene. The six main characters go out for beers following Ty's initiation. Another character quickly pops some pills in the locker room, but it's not clear what they are (aspirin?).