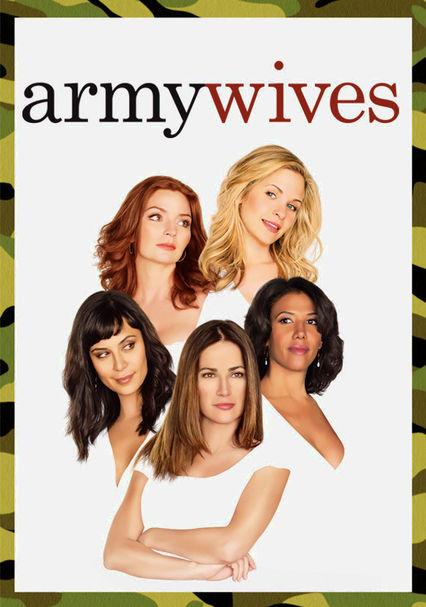 2007 TV-14 7 seasons
This drama series follows the emotional ups and downs of four women and one man, each married to a soldier and living on an army base where they contend with infidelity, PTSD, their spouses's long deployments and other heartaches.

Kim Delaney and Catherine Bell head a spectacular ensemble cast as members of a group of Army spouses who support one another through the pain and struggles of seeing their loved ones sent into harm's way. Through it all, the women share the dark personal secrets each one harbors. This compelling dramatic series also stars Sally Pressman, Brigid Brannagh, Brian McNamara, Sterling K. Brown, Wendy Davis and Drew Fuller.

The third season of this hit Lifetime drama follows the trials and inspiring triumphs of four women and one man who battle with the unique demands of having a spouse on active duty in the military. As life at Fort Marshall wears them down, Claudia Joy (Kim Delaney), Denise (Catherine Bell), Roxy (Sally Pressman), Pamela (Brigid Brannagh) and Roland (Sterling K. Brown) support each other through loneliness, adultery and other struggles.

Lifetime's hit drama about the lives of four Army wives and one Army husband continues with new developments that boiled over from the show's third season, including Jeremy's (Richard Bryant) unexpected arrest after firing a gun inside his parents' (Terry Serpico and Catherine Bell) residence. Meanwhile, Roxy (Sally Pressman) is pregnant, and Claudia Joy (Kim Delaney) prepares to accept a prestigious award.

In the fifth season of this hit drama, Roxy, Roland and the other military spouses at Fort Marshall lean on each other in the face of new challenges, including dealing with a new baby, sending a child off to college and losing one of their friends.

Change is in the air as the wives prepare to leave Fort Marshall and go their separate ways. But the bond between these women is strong, and not even a violent natural disaster can weaken their tribe.

The group is all smiles after Claudia Joy receives good news after a major operation, but the celebration is short-lived after another friend finds herself in dire straits. Meanwhile, tragedy erupts at Fort Marshall's 100th anniversary ceremony.

As they attempt to put their lives back together in the wake of devastating tragedy, the wives and their families welcome new neighbors. Brooke Shields and Jesse McCartney are among the new faces in this season of the powerhouse drama.

Parents need to know that this drama about military spouses has strong sexual innuendo, some upsetting scenes of a teen physically abusing his mother, and lots of drinking (some in response to post traumatic stress), While current events in the Middle East provide a backdrop for the show, at its heart, the series is a fictional drama about life as an Army wife (or husband) -- not the current war.

Strong sexual innuendo and occasional simulated sex acts (including oral sex). Some skimpy underwear. Some of the wives discuss the various names for their vagina, talk about virginity, etc. Sex and infidelity are frequent topics of discussion.

Disturbing images of a teen son hitting/abusing his mother. News footage of U.S. troops in Iraq and Afghanistan is sometimes visible. Children occasionally play with guns, tanks, and other military-type toys. Soldiers are sometimes seen working with or wielding guns. Physical fights between soldiers, some of whom are drunk or traumatized. Some violent incidents, like explosions.