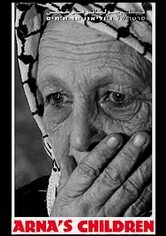 2004 NR 1h 25m DVD
Arna Mer Khamis was a legendary activist for the rights of the Palestinian people who founded a theatre group at a refugee camp, teaching children to express themselves through acting. Her son Juliano, a director for the group, filmed Arna working with the children over a 6-year period. Following Arna's death, he returns to the camp to find out what became of the young refugees. Best Documentary Feature winner at the 2004 Tribeca Film Festival.