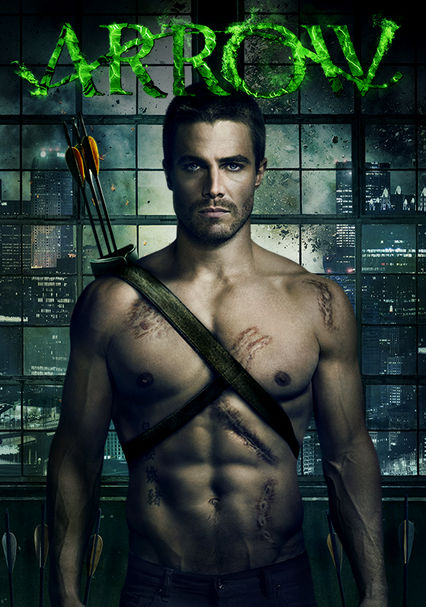 2012 TV-14 6 seasons
This adaptation of the story of DC Comics' Green Arrow stars Stephen Amell as the titular character, an affluent playboy who becomes an archer superhero at night, saving the city from villains armed with just a bow and arrows.

Shipwrecked and presumed dead for five years, billionaire playboy Oliver Queen returns home a changed man. Secretly, he's the vigilante Arrow, fighting for his family and his city. But someone close to him also harbors a secret.

At the end of Season 1, Archer claimed victory over Dark Archer, but the city lie in ruins and his best pal was dead. Now, he faces a new nemesis. Her name is Isabel Rochev, and she's the vice president of acquisitions at Stellmoor International.

The Arrow has become a hero to the citizens of Starling City -- but that doesn't mean that Oliver Queen can take his eye off the ball and lead a normal life in the spectacular third season of the hit series based on the DC Comics character.

Bon vivant turned vigilante Oliver Queen -- aka Arrow -- continues his fight against injustice. Joining him this season is the classic Batman character Anarky, along with Justice Society member Mr. Terrific.

After his showdown with Damien Darhk, Arrow -- aka Oliver Queen -- travels to Russia in a series of flashbacks that will answer questions about his past. In the present, Arrow takes on a foe who's devoid of superpowers but formidable nonetheless.

After last season's emotional showdown between Oliver Queen and Adrian Chase, the focus shifts into uncovering the fate of each and every member of Team Arrow -- with their futures left hanging precariously in the balance. Having finally solidified and strengthened his crime-fighting team, the Green Arrow might be forced to rethink his relationships with his "family" in Season 6.

Parents need to know that Arrow is a tense action-adventure series that's loosely based on a DC Comics story about a castaway survivor who returns to his hometown to make up for his past sins by taking revenge on the criminals who plague his city. His weapon of choice is a bow and arrow (hence his moniker), but he's also adept with other weapons and in hand-to-hand combat, so there's a lot of fighting/violence in the show. Viewers will also see teen drug use (mostly implied by handling or buying the stuff), drinking, and suggestions of sex. That said, it's notable that the romantic relationship at the heart of the show is one that was damaged by the main character's long-ago act of cheating, and his desire to make up for his mistake helps fuel his vigilantism. Though his actions are in defense of innocent victims, and he chooses his marks carefully, the concept of taking justice into your own hands is an iffy one -- and one of many topics that parents can discuss with teens after watching.

Content implies that sex is imminent or has recently occurred, but there's no simulation of the act. Women lounge in lingerie, there's some hot-and-heavy kissing, and language mentions "screwing" and women being "hot."

Fighting and death by gunfire, beatings, electrocution, strangulation, suicide, and spine snapping are fair game in this action-packed show. A fair amount of blood, and some scenes of kidnapping and torture. Both "good" and "bad" guys use violence as a means to push their agenda.

Intermittent use of words including "damn," "suck," "hell," and "ass."

On one hand, the hero takes revenge on the worst of the worst: people who lie, cheat, and steal their way to power and wealth, often at the expense of the little guy. He's motivated by a quest to right family wrongs that were confessed to him by his father, and his actions make life better for the criminals' victims. On the other, the hero acts outside the legal system and without concrete proof of others' wrongdoing, and he kills in revenge. Many characters are motivated by greed and secrecy, even within families. Prior to the shipwreck, Oliver cheated on his girlfriend with her sister, but in retrospect, he regrets the impropriety and seeks to make amends for it.

Most social and dining events have alcoholic drinks, and a main character is known to do drugs, which she has used for coping with the tragedies in her life.