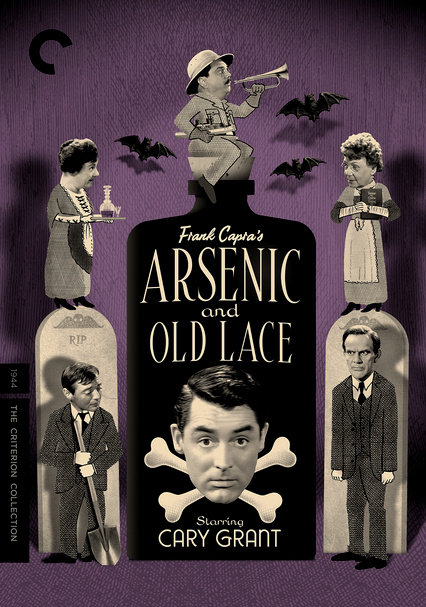 1944 NR 1h 58m DVD
On Halloween, newly married drama critic Mortimer Brewster returns home to Brooklyn, where his adorably dotty aunts greet him with love, sweetness . . . and a grisly surprise: the corpses buried in their cellar.

Parents need to know that this popular Golden-Age-of-Hollywood comedy concerns multiple murders and madness, but without anything graphic shown. Violence is just roughhousing and a menacing display of knives. Some jokes (especially having to do with baseball stats of 1944) are badly out of date. There is an undercurrent of drinking, with poisoned wine a key plot element. This isn't in any way meant to be an enlightened view of families grappling with mental illness.

Slapstick-y fistfight, including a bench-clearing baseball brawl at the start (that has nothing to do with anything). People get hit on the head a lot, including by police billy-club. Mortimer is tied up and threatened with death via surgical-scalpel torture, though nothing comes of it. Despite the many killings that have taken place, dead corpses are hardly even seen.

Breezy stuff doesn't go out of its way to instruct or preach; it's mostly for laffs, with the slight suggestion of how frantic Mortimer is willing to sacrifice his marital happiness for the ones he loves -- whether it's his murderous aunties or his new wife (Mortimer briefly fears that he's inherited genetic insanity himself and tries to scrap the marriage). Undertone that even sweet little old crazy ladies can rack up a body count as impressive the full-time maniac Jonathan.

Alcohol drinking by various characters, with the qualifier that some of the wine is poisoned, and would-be victims are disuaded from imbibing. Mortimer smokes.