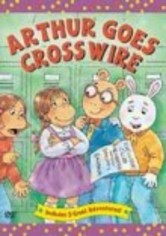 2005 NR 0h 45m DVD
Arthur the Aardvark learns the importance of maintaining his friendships in "Arthur Goes Crosswire," the title episode of this three-episode collection from the popular PBS series. After Arthur and Muffie rescue TV star Wilbur Rabbit (aka Bionic Bunny), the two friends form an exclusive club, leaving Arthur's other friends on the sidelines. Will Arthur realize how his pals feel before it's too late? The video includes two additional stories.