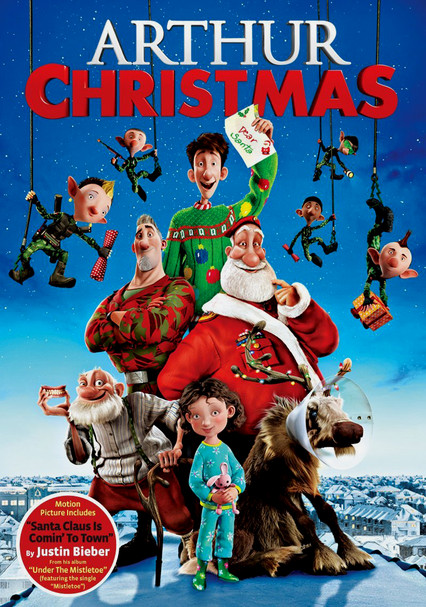 Parents need to know that Arthur Christmas is a heartwarming animated holiday adventure that's a fine pick for the entire family. One brief scene of a group of startled wild animals and another of an angry homeowner wielding a gun may frighten very young kids, and there are a few jokes targeting parents -- like when Grandsanta explains that "in the old days," he once gave a double whiskey to an elf. But otherwise this movie from the British animators behind Chicken Run and Wallace & Gromit provides a good reminder of the holiday spirit, family unity, and being generous. Families that don't celebrate Christmas should know that the story doesn't have any religious overtones; the emphasis remains on Santa and his family.

An encounter with wild animals in Africa could frighten younger viewers; the lions look especially ready to pounce. A dog is another formidable obstacle to delivering a gift. In one scene, a homeowner gets out of his house and fires a gun at Arthur, Grandsanta, and Bryony, mistaking them for aliens; in another, missiles are fired at Grandsanta's sleigh, and it bursts into flames. Some of the sleigh rides themselves are a little perilous, especially when the police are involved, and there's a fair bit of military flavor to some of the goings-on. Physical comedy gags include clumsy Arthur always falling and tripping into things, being afraid of heights, and otherwise wreaking havoc on the elves' world.

The word "hell" is said. Grandsanta pokes fun at this son, Father Christmas, by using some clever nicknames.

Arthur's story is an example of how one person can really make a difference and why families should work together. Arthur and Bryony also exemplify rising to the occasion and overcoming fears. Christmas, the movie suggests, is about the joy of feeling of loved and appreciated. There's also a worthwhile message about finding a balance between technology and tradition, especially during the holidays.

Grandsanta looks tipsy and recalls when he gave an elf a "double whiskey" to forget about something. There's also a scene in his room where viewers see him near lots of alcohol bottles, but he's never seen drinking.