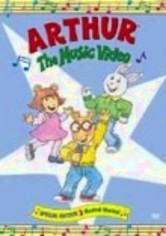 1999 NR 1h 0m DVD
Arthur the aardvark and his pals go on some musical adventures in these three episodes of the popular animated television show. First, in "Arthur's Almost Live Not Real Music Festival," the gang finds some imaginative ways to make music videos. Then, a wandering minstrel moose guitarist (voice of Art Garfunkel) shares "The Ballad of Buster Baxter," and Arthur becomes a suspect when a CD goes missing in "D.W. and the Crazy Bus Song."