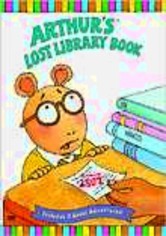 1996 NR 0h 40m DVD
Included on this video are three separate episodes of the popular animated TV series featuring the lovable aardvark who's captured the hearts of children everywhere. Arthur is excited that a new scary book is about to be released, but can't understand what's happened when he can't find it after checking it out from the library. Also includes "D.W.'s Imaginary Friend," as D.W. puts her imagination to good use to make her loneliness disappear.