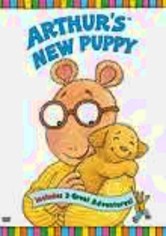 2004 NR 1h 0m DVD
Join Arthur and his pals in this fun-filled animated series based on Marc Brown's best-selling children's books. This video includes three adventures: "Arthur's New Puppy," in which Arthur gets a puppy and must learn how to train it; "Buster's Dino Dilemma," in which Arthur and Buster make a trip to a dinosaur excavation; and "Binky Barnes, Wingman," in which Binky discovers a new pastime and becomes obsessed with catching the Big Blue Butterfly.