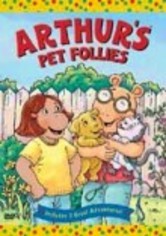 2003 NR 0h 40m DVD
Included on this video are three separate episodes of the popular animated television series, which airs on PBS, featuring the lovable, mischievous aardvark who's captured the hearts of children everywhere. Here, we find that Arthur and some of his friends have gotten into mischief with some cute but rowdy pets.