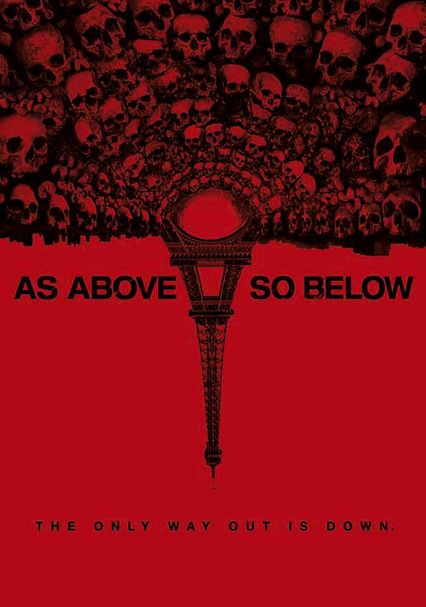 2014 R 1h 33m Blu-ray / DVD
Descending into the dark and bone-strewn caverns beneath the Paris streets, a party of explorers hoping to find a treasure trove instead encounter a nightmare. When a cave-in blocks the only exit, all hell breaks loose -- literally.

Parents need to know that As Above/So Below is a "found footage" horror movie about archeologists seeking treasure in the catacombs beneath the streets of Paris. There's some brief but strong gore when characters are injured or attacked in the tunnels. Characters die, plenty of blood is shown, and there are some gory injuries (a smashed skull, a gaping neck wound, etc.). There are also some scary moments -- from cave-ins and claustrophobia to ghosts and creepy creatures. Language is fairly strong, including several "f--k"s and quite a few uses of "s--t." There's some brief female toplessness, and two characters have a kind of bickering-flirty relationship. The movie definitely has its spooky moments, and older teen horror fans will no doubt be interested.

The characters stumble upon a ritual in the tunnels in which a few women are briefly shown topless. Otherwise, two of the main characters have a somewhat bickering-flirty relationship, and they eventually confess their feelings for each other, even if there's no time to act on them.

Lots of blood and gore, though not extremely over the top. The herky-jerky "found footage" camerawork never really lingers on anything for very long. Characters are injured and/or attacked while traveling around the tunnels. One character falls to his death, and a character bashes another's head against a rock, all but destroying her skull. Another character gets a gaping wound at the base of his neck. There are realistic cave-ins, plus nightmare sequences with ghosts and other creepy creatures. Also, the movie has some tense, claustrophobic moments.

The movie features some teamwork and characters who use their head in a dire situation, but overall, these twentysomethings tend to be risky and reckless.

One character is shown casually drinking a cocktail in an early nightclub sequence.