As Time Goes By: Reunion Specials 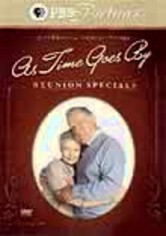 As Time Goes By: Reunion Specials

2005 NR 2h 0m DVD
Picking up a number of years after the popular British television series left off, this two-part reunion special drops in on Jean (Judi Dench) and her husband, Lionel (Geoffrey Palmer), former lovers who married after a 40-year separation. Obsessed with becoming a grandmother, Jean prods her daughter Judith and ex-employee Sandy (who's like a member of the family) toward motherhood -- until a stranger from Lionel's past changes everything.