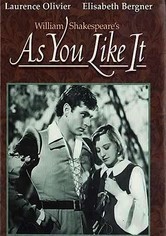 1936 NR 1h 36m DVD
Rosalind (Elisabeth Bergner), the daughter of a banished duke (Henry Ainley), loves Orlando (Laurence Olivier, in his first Shakespearian role on celluloid) -- the son of one of her father's courtiers. When Orlando ignores her to be with the exiled nobleman, Rosalind disguises herself as a male and follows Orlando in an effort to win him over. But her deception works a bit too well in this 1936 adaptation of William Shakespeare's classic comedy.