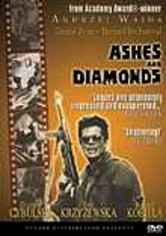 1958 NR 1h 45m DVD
Polish actor Zbigniew Cybulski stars as Maciek Chelmicki, a young Resistance fighter at a crossroads: He must decide between living a life of crime or opening his heart and soul to the woman he loves. Directed by Andrzej Wajda, this is the third film in his series about World War II, set in small-town Poland as it's being engulfed by two opposing forces -- one that supports Communism and one that's fighting it to the bitter end.