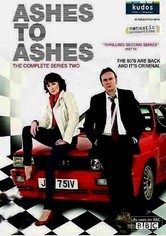 2008 TV-14 2 seasons
DCI Gene Hunt rolls up his sleeves and embraces the '80s in the sequel to the critically acclaimed drama Life On Mars. He meets DCI Alex Drake, who is ripped from her world of sexual equality and transported back in time to a very different London.

DCI Gene Hunt rolls up his sleeves and embraces the '80s in the sequel to the critically acclaimed drama Life On Mars. He meets DCI Alex Drake, who is ripped from her world of sexual equality to find herself transported to a very different London.

It's 1982, and Detective Inspector Alex Drake, haunted by sudden visions and unable to prevent the death of her parents, is still no nearer to returning to her own time. Meanwhile, Chief Inspector Gene Hunt uncovers a web of corruption.

Parents need to know that this follow up to British detective series Life on Mars has some intense content. Suspects and officers are shown being violently kicked, punched, and shot at, and explosions are frequent. There's also occasional nudity (bare buttocks) and simulated sex acts, and officers drink and smoke frequently (suspects are shown dealing cocaine). Language includes some salty British slang, as well as words like "hell" and "screwed." Although the behavior featured here is a little bit more "PC" than the original '70s-set series, male police officers still rough up suspects and exhibit lots of sexist behavior toward their female coworkers.

Some strong sexual innuendo, including men grabbing women's breasts and references to "shagging." Nudity (bare buttocks) and simulated sex acts in some episodes. The female officers/detectives are sometimes required to dress up as prostitutes. Words like "hooker" and "shagging" are often used. There's also some discussion about a woman's virginity.

Episodes deal with violent acts like rape, drug trafficking, and murder. Guns are often fired, and people get shot (blood is sometimes visible); frequent scenes of people dying in explosions. Suspects and police officers are shown being punched, hit, and kicked. Officers are shown slamming suspects' heads into cars and being slapped in the groin. One scene features a naked suspect being forced to lie down on a pool table and have his genitals hit by a billiard ball.

The word "pissed" (which means "drunk" in Britain) is used frequently. Stronger words like "hell", "arse," "ass," and "piss off" are also audible.

Alex is working through personal issues with her mother as she struggles to return to her daughter. The majority of officers and detectives are male, and they consistently exhibit sexist behavior toward their female counterparts. But ultimately the team is there for each other. Not a lot of cast diversity.

Popular '80s stars like Adam Ant and The Romantics are seen and heard. Brands like Tab soda are visible; Hunt drives an Audi Quattro, while Shaz listens to a Sony Walkman. References to Star Wars.

The officers and detectives frequently drink together (wine, beer, champagne) after a hard day and often get drunk. The series also includes discussions about drug (mainly cocaine) smuggling; packages presumed to be cocaine are visible. As is typical with many British series, smoking is visible and frequent.