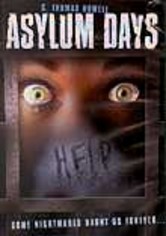 2001 R 1h 40m DVD
C. Thomas Howell stars in this creepy thriller about moviemaking gone mad. Daniel, a screenwriter, and Laura, the actress who serves as his muse (even though he's never met her), are brought together by Daniel's crazed brother, Nathan, who has taken a script Daniel wrote based on Laura's tortured childhood at the St. Clair Asylum. Nathan abducts the two and takes them to St. Clair in a misguided attempt to bring Daniel's words to the big screen.