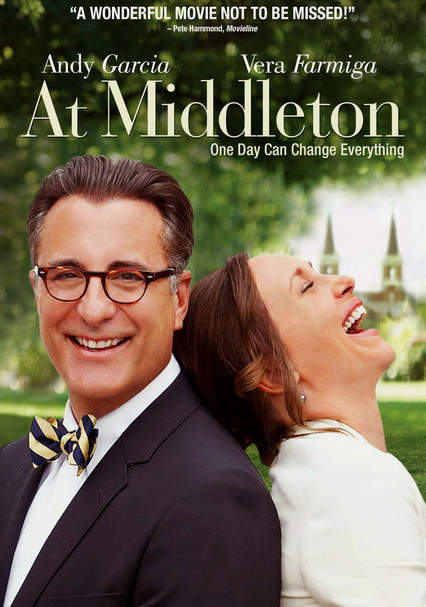 2013 R 1h 40m Blu-ray / DVD
When uptight surgeon George and free-spirited retailer Edith accompany their teenagers on a tour of Middleton University, their initial dislike of each other turns into a possible romance as they split from the group on their own adventures.

Parents need to know that At Middleton is a movie for adults, not because of any major iffy content, but because its themes involve the challenges of long-term marriage as well as the feelings that come along with sending kids off to college. There's some heavy flirting between adults (who are married to other people), plus some scenes where adults see college kids kissing and having sex in the distance. One scene involves adults smoking pot with college kids and acting very loopy. Expect some swearing, but not much.

Two middle-aged adults spy on college students kissing in a library, and later see a couple having sex from afar on the roof of a building. The two, who are both married to other people, flirt with each other all through the film, and it's unclear how far they'll take this new relationship.

A few scenes show heated arguments between teens and adults.

A few scenes have profanity, though the choice words are few and far between, including "s--t," "ass," and "f--k."

Marriage is tough, and it doesn't always get easier over time. It's important, but sometimes scary, to examine your life's accomplishments and status. Also, sometimes young adults can act more mature than adults.

Almost everyone in the film seems to have Apple products, either phones, computers or both.

An adult drinks beer in one scene. Another extended sequence involves two adults getting very high on pot with two college students, using a bong, and then getting quite loopy.