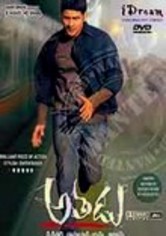 2005 NR 2h 0m DVD
Inspired by the Sylvester Stallone- and Antonio Banderas-starred Assassins, Athadu tells the story of a professional hit man, Nandu (Mahesh Babu), who assumes the identity of a runaway killed in the crossfire of a botched operation. To escape from the cops, Nandu hides out in a remote village in the house where the slain boy grew up in this film from director Trivikram Srinivas.