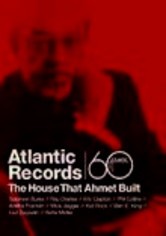 2007 NR 2h 0m DVD
With a $10,000 loan from his dentist, Ahmet Ertegun co-founded Atlantic Records in 1947. By the 1950s Atlantic was the country's premier R&B label. Ertegun's wondrous rise is recounted in this lively episode from the PBS series "American Masters." It took director Susan Steinberg more than four years to capture Ertegun in candid conversations with music greats Robert Plant, Aretha Franklin, Bette Midler, Ray Charles and many others.