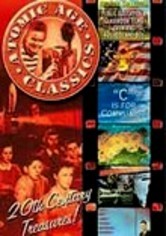 2006 NR 1h 54m DVD
The series that combs the vaults for the finest overly earnest and unwittingly campy public information films of yesteryear presents a collection of shorts that chronicles America's post-World War II paranoia about communism and the lurking threat of the Soviet Union. Propaganda films such as "What Is Communism," "Yankee Go Home," "Red Myth" and "Crusade Report" provide an entertaining retrospective of the anxieties that gripped an entire nation.