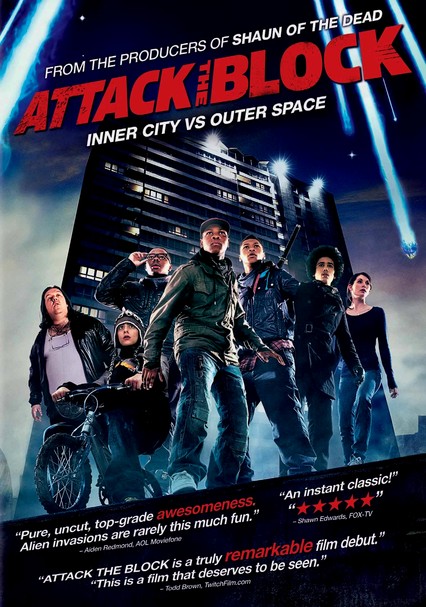 2011 R 1h 28m Blu-ray / DVD
When aliens attack a South London neighborhood, a teen gang pulls together to protect their turf by any means necessary. But extraterrestrials prove far more formidable than anyone they ever jumped on the streets.

Parents need to know that this smart but violent UK alien invasion movie from some of the folks behind cult faves Shaun of the Dead and Hot Fuzz features lots of cartoony sci-fi monster battles, with heavy gore (expect to see severed heads, spurting blood, limbs being torn off, and more). Language is likewise strong, with streetwise teens constantly using "f--k" and other words, and pot-smoking is a major event in the characters' lives -- some of the teens spend the entire movie stoned, and they hang out with a drug dealer who keeps a special room filled with pot plants. Beneath all of the iffy stuff, though, there are messages about working together and learning to respect others.

Strong (albeit cartoonish) sci-fi violence, with several battles against monsters from outer space. Monsters are killed, as are some humans; images include severed heads, face-ripping, throat-ripping, leg-biting, spurting blood, and other gory scenes. Viewers see knives, swords, guns, and various other weapons (including a rocket).

Former adversaries learn to work together to battle a greater threat, and in the process they learn to respect and empathize with one another. They exhibit teamwork to triumph over some terrifying odds.

Pot smoking is a major pastime in the teen characters' lives; some are stoned throughout the entire movie. They hang out with a drug dealer, who keeps a special room filled with pot plants.