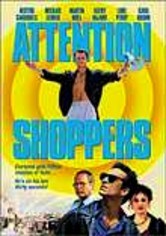 2000 R 1h 44m DVD
Enrique Suarez (Nestor Carbonell, who also wrote the screenplay) is a supporting actor on a mediocre sitcom in this day-in-the-life showbiz comedy. When Suarez makes an appearance at the opening of a Houston K-Mart, the entire trip turns out to be a disaster: His limo driver in Los Angeles criticizes his accent on the show; a soap opera star wants to chat philosophy; and his Houston appearance is a bust.