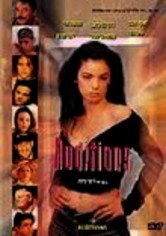 1995 NR 1h 32m DVD
Exploring life behind the scenes in the Israeli theater, this critically acclaimed film features a cast of rising young stars. After graduating from school, several idealistic and attractive young actors try their luck on the stage, but are soon struggling to survive in a cutthroat world where deception and betrayal dominate. Tali Atzmon, Aki Avni and Orly Ben-Garti star in this poignant psychological drama.