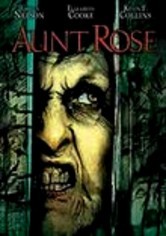 2005 NR 1h 30m DVD
When three murderous thugs (Joshua Nelson, Velocity Chyaldd and Kevin T. Collins) on the run from the law break into a suburban home and take its inhabitants hostage, they get a bit more than they bargained for in one of their victims. Aunt Rose (Marty Gargle) may be sickly, but she's also a witch -- and when her favorite niece falls prey to the baddies, she's not about to take things lying down in this supernatural chiller from James Tucker.