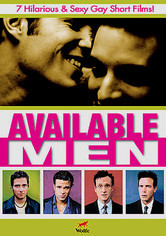 2006 NR 1h 45m DVD
Tales of mixed identities, personal ads, gay cartoon cowboys, passive aggression and more are collected in these seven hilarious, gay-themed shorts, which have been honored at such festivals and ceremonies as the Sundance Film Festival, the U.S. Comedy Arts Festival and the PlanetOut Awards. The films are Available Men, Straight Boys, Hello Thanks, The Underminer, Sissy French Fry, Tumbleweed Town, and Irene Williams: Queen of Lincoln Rd.