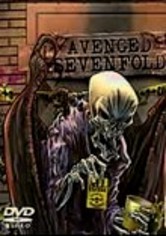 2007 NR 1h 10m DVD
In 2006, Avenged Sevenfold walked away from the MTV Video Music Awards with Best New Artist honors. This feature documents the rise of A7X from an underground metal outfit in Orange County, Calif., through their breakthrough album, "City of Evil." A must-see for fans, this release has it all: live concert performances, behind-the-scenes tour footage and videos for hits such as "Unholy Confessions," "Bat Country" and "Beast and the Harlot."