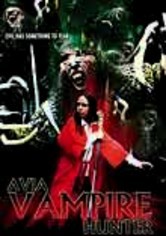 2005 NR 1h 23m DVD
Where Buffy leaves off, Avia Richards the vampire huntress begins. Avia wages a tireless one-woman war against the evil demons hidden among us who live to feed on the next unsuspecting victim. Armed only with a samurai sword, Avia dauntlessly hunts down the bloodsuckers, putting her life on the line in a daily do-or-die battle. But Avia's personal demons often seem to cast a longer shadow than the monstrous foes she fights.