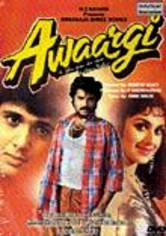 1990 NR 2h 29m DVD
After mob enforcer Azaad (Anil Kapoor) rescues young prostitute Seema (Meenakshi Sheshadri) from a Bombay brothel, he enlists local musician Dhiren (Govinda) to help her fulfill her dream of becoming a professional singer -- and both men end up falling for the beauty. Soon, Azaad must both compete with Dhiren for Seema's affections and square off against the brothel owners who plan to punish him for taking one of their working girls.