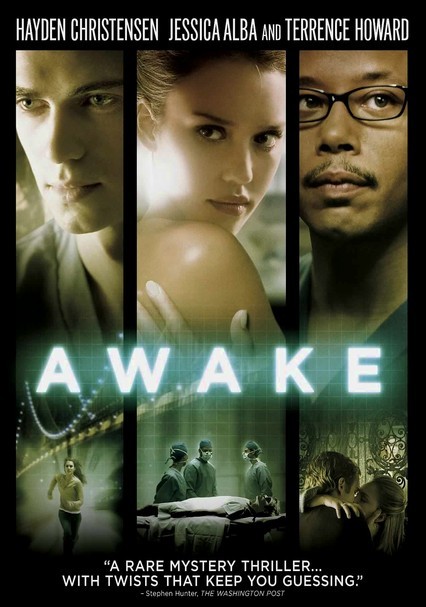 2007 R 1h 24m Blu-ray / DVD
While undergoing a heart transplant, a man experiences "anesthetic awareness," a condition that allows him to see and feel everything that's happening to him but leaves him paralyzed -- a disadvantage when he learns of a conspiracy to kill him.

Parents need to know that even though this grim thriller stars teen favorites Hayden Christensen and Jessica Alba, it isn't meant for kids. There are many scenes of bloody open-heart surgery, with some explicit sound effects (cutting, sawing, ribcage cracking). Because Clay is conscious and feels pain during the surgery, there are some gruesome parts in which he internally screams, swears, and makes noises; it's essentially grisly torture (not unlike what passes for plot in the Saw movies). There are several kissing scenes, two of which lead to sex (though more is implied than shown). Expect lots of prescription medication use, some smoking (and discussion of it being bad for you) and drinking, and many uses of both "f--k" and "s--t."

Clayton appears in bathtub, then pulls Sam in with him (they engage in "sexy" talk during the seduction, such as "I was picturing you soaking wet with all your clothes on"). They kiss and embrace passionately before the scene cuts (sex is implied). They stand side by side in front of a mirror, naked; she's brushing her teeth, and the outline of her naked breast is visible. Several scenes show passionate kissing between the two, and at least one other scene shows the side of her breast. She appears in her bra and underwear beneath Clay as they kiss, preparing for sex -- but the scene cuts away before they get all their clothes off.

Much bloody and yucky imagery related to surgery. Incisions show blood, organs, and internal goo; operation shows rib separator, cuts into heart; bloody surgeons' gloves. As Clay is "anesthetically aware" during surgery, he yells, screams, and expresses much pain. Clay and Lilith discuss his memories of his father's death. A character is hit with a fireplace poker; the body falls over a balcony, and there's a shot of the crumpled corpse on the floor three stories below. Suicide by pill overdose (body shown). When the cops arrest a woman, they smash her face against the floor.

Scheming, careless doctors; anesthesiologist drinks on the job; an accidental murder appears in a flashback; mother and son relationship at first seems too intimate and codependent.

Lots of prescription pills are taken and shown in bottles (Clay has a heart condition). Minor cigarette smoking. Drinking and toasting (one hallucination includes a room full of schoolboys lifting wine glasses in a toast). An anesthesiologist drinks from a flask during surgery. A drunken character snorts cocaine.