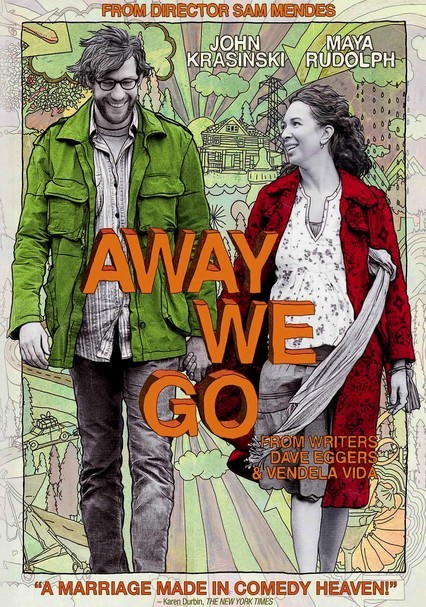 2009 R 1h 38m Blu-ray / DVD
Buoyed by the news that they are expecting their first baby, Burt and Verona embark on a journey to locate the perfect place on the planet to raise their child. But their quest inevitably yields many unexpected surprises.

Parents need to know that older teens may be intrigued by this indie drama because of star John Krasinski and writers Dave Eggers and Vendela Vida. Its unvarnished look at different types of parenting, though exaggerated for cinematic effect, hits home and could very well prompt some internal analysis. Expect a range of strong language (including "s--t" and "f--k"), some sexuality (including a glimpse of a bare breast), and social drinking.

An earthy couple gives off a very sexual vibe; they drop hints about wanting sex in front of others. The wife inadvertently reveals her breast as she adjusts after breastfeeding. Another woman does a sensual dance on a stripper stage; it plays with melancholy, though, as her husband shares a tragedy with his friend while his wife dances.

The lead characters are very mindful of the enormity of their responsibilities. But a mother ridicules her kids and talks openly about wanting to leave their father, and another couple is openly judgmental of other people's parenting decisions. Grandparents-to-be don't seem to care to stay for the birth of their first grandchild. A lead character flings a stream of insults at old friends he feels are acting self-righteous. And a tipsy mom is rude to her children and much too generous with back-handed compliments.

Some social drinking in bars and over dinner. One couple drinks all day long.