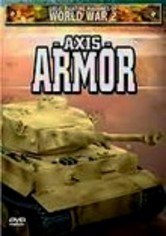 2006 NR 1h 0m DVD
Using authentic combat footage from the early stages of World War II, this documentary-style program takes you to Poland, Holland, Belgium, France, North Africa, the Balkans and Russia to experience the heft of the Axis drive against the Allies. Segments show divisions of German Panzer tanks in action as well as the self-propelled guns, tanks and armored cars of the Japanese and Italian armies.