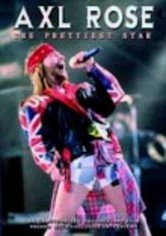 2005 NR 1h 0m DVD
Guns N Roses singer Axl Rose is the subject of this documentary that reveals the rock star's life from his childhood days in Indiana and his dependence on music as an escape from an abusive home life to his success with Guns N Roses and more recent endeavors such as the album "Chinese Democracy." The film features rare backstage footage and interviews with friends and colleagues including Chris Weber, Vicky Hamilton, Skip Sailor and Robert John.