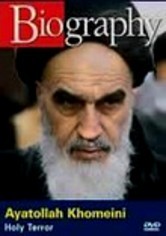 1997 NR 0h 46m DVD
Delving into once-sealed CIA archives, this installment of A&E's "Declassified" series outlines the forces that propelled Iran's Ayatollah Khomeini to power and his influence on the course of history. As the political and spiritual leader of the 1979 Iranian revolution, Khomeini oversaw the takeover of the U.S. Embassy in Tehran and the capture of 52 hostages, launching an unprecedented reign of terror against the West in the name of Islam.